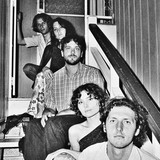 synchronised dancing and matching costumes to create a visually stunning live performance. Along with Fuzzy instrumentals, melodic lead guitar sections and tight rhythms, Nice Biscuit create a sonic exploration of psych-rock that can't be missed. Since forming in 2016, Nice Biscuit has embarked on two packed-out headline tours and won coveted support slots for The Brian Jonestown Massacre, The Growlers, Allah Las, The Murlocs and Jen Cloher. They also graced the stages of a number of Australian festivals including A Festival Called Panama, Jungle Love and Gizzfest. In May of 2019, the band embarked on its first UK tour, scheduled around an invitation to showcase at The Great Escape Festival in Brighton. Since 2019, Nice Biscuit have been slow-cooking a flavoursome psych rock stew, with their new single “Fem Chem”