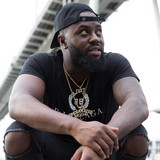 South London grime artist Cadet (aka Blaine Johnson) grew up alongside fellow MCs Konan, Krept, and Redz as part of the notorious Gipset gang. The teenage crew gained a considerable following across social media toward the end of the noughties with their videos of freestyles about gang life and London living. Using music as their escape, the members all focused on their careers, with Krept and Konan eventually signed to a major in 2013. Cadet continued to plow his own path, and in 2015 delivered freestyles for underground London-based music channel OSM Vision, and suddenly saw his profile skyrocket. Switching his tone from gang-related tales to emotional lyrics about life and its tribulations, Cadet found a new audience for his raps. In 2016 Cadet dropped his first mixtape, The Commitment. The self-released album saw him teaming up with the likes of Donae'o and Tis Rome. Continuing to deliver freestyles for various online music channels including SBTV, the rapper built up a respectable following. Cadet released a follow-up album, The Commitment 2, the following year. Featuring a number of singles -- including "Instagram Girls" and "No More Letters" -- the album cemented Cadet's rise from teenage tearabout to full-fledged grime star. ~ Rich Wilson, Rovi