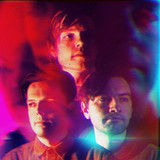 A Sudden Burst of Colour

Featuring A Sudden Burst of Colour

energetic rock music that hits hard live. ''Projecting sun-blushed, shimmering orchestrations, there’s a definite atmosphere to their music; a blissful serenity translated through the busily syncopated guitar and bass melodies and intertwining dance rhythms.'' (Good Grief Records) Following on 'Forever/Captivator', the bands latest release is 'Transgressor/Decoder'. Produced, engineered and mixed by Calum Farquharson midway through 2019 on the shores of Loch Fyne, Scotland. Mastered by Eric Broyhill. Encompassing more electronics than previous releases, this release adds another dimension to the bands ever evolving sound; giving an insight into the bands future direction. As mentioned previously, all audio was produced, recorded and mixed by bass player Calum Farquharson, and all artwork and video was produced by drummer Liam Shaw. The band have a strong DIY ethos, and nothing displays this more than the release itself. Transgressor/Decoder was released independently on the 18th of December, 2020. It's available on all major streaming platforms and in physical format from www.asbocmusic.bandcamp.com