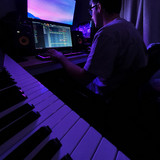 Deepersonal is a producer, musician and songwriter born in East London. Starting his musical beginnings in 2010 at the age of 11, teaching himself music production throughout years of experimentation and how-to videos. From then on uploading a number of songs on YouTube and Soundcloud, quickly gaining a following for his growing ability and unique blend of EDM and R&B sound. Jumping to 2016, after finishing college studying music technology, he had his first official label release Why - an upbeat groovy house track that is still his best selling song to date. Also catching the attention of producers such as Sam Feldt, Jengi and deadmau5. Throughout the next few years he studied Pop music and Jazz piano while expanding his fan base and catalogue of songs. In 2019 as a side project he released an album with a Central London based licensing company, straightaway getting records licensed to large organizations such as the BBC. The now 22 year old is striving to become one of the UK's biggest producers and aims to work solo and alongside teams of producers, musicians and songwriters creating chart level songs within the Pop, Electronic and R&B genres.