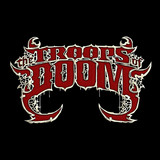 The Troops of Doom

Featuring The Troops of Doom

THE TROOPS OF DOOM is a new Brazilian Metal band led by the guitar player JAIRO “TORMENTOR” GUEDZ from the band THE MIST and former member of original SEPULTURA line-up, author and co-author of the classic albums “BESTIAL DEVASTATION” and “MORBID VISIONS”, having also participated of some compositions on “SCHIZOPHRENIA”. The band also includes ALEX KAFER (Enterro, Explicit Hate, Ex-Necromancer), on bass and vocals, the drummer ALEXANDRE OLIVEIRA (Southern Blacklist, Raising Conviction) and the guitar player MARCELO VASCO (Patria, Mysteriis), acclaimed graphic artist for legendary bands such as Slayer, Kreator, Machine Head, Soulfly, Hatebreed among many others. THE TROOPS OF DOOM goal is rescuing the essence of the good and old Death Metal of the 80’s, exploring a more primitive sound, that takes the listener back to that era, almost in a nostalgic way. The band will release its debut EP, “THE RISE OF HERESY”, which features four original songs and two cover versions of SEPULTURA classics: “Bestial Devastation” and “Troops of Doom”. The material was mastered by Øystein G. Brun (BORKNAGAR) at Crosound Studio (Norway) and is set to be released on October 9th via Nuclear Blast’s digital subsidiary, BLOOD BLAST.