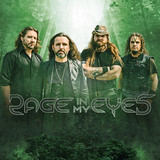 Rage In My Eyes

Featuring Rage In My Eyes

Metal hailing from Brazil and Los Angeles, blending Heavy, Prog, Folk & Thrash w/ Milonga. Formerly known as Scelerata - Est. 2002 Under the name Scelerata, the band put out three worldwide released albums: Darkness & Light (2006), Skeletons Domination (2008) and The Sniper (2012). The latter was recorded in Germany, at the Blind Guardian studio, produced, mixed and mastered by Charlie Bauerfiend and features special guests Andi Deris (Helloween) and Paul Di'anno (former Iron Maiden). Scelerata was Paul Di’anno’s official Brazilian backing band from 2009 to 2014; supported bands such as Deep Purple, Kamelot, Edguy, Gamma Ray, Angra, Viper, Shaman and played live with Roy Z (Bruce Dickinson, Halford) and Kiko Loureiro (Megadeth, former Angra). In 2018, the band opted for a name change to RAGE IN MY EYES. In 2019, the album Ice Cell, was released along with the video for the track Death Sleepers. In October 2019, RIME opened for IRON MAIDEN for 40,000 metalheads on the Legacy of the Beast Tour (2019). In 2020, RIME put out the official video for the track Hole In The Shell and released an original song as a single to honor the late Andre Matos, called I Don't Want To Say Goodbye. In 2021, Rage In My Eyes releases the EP SPIRAL and promotes it with four official music videos, one for each track.