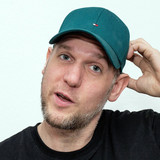 Hailing from Germany’s prolific Rhein-Main area, Frankfurt’s M.in gained his momentum as global player over the last years. As producer, DJ and label head his modern house and techhouse-style clearly owes to the Frankfurt heritage, yet M.in never claimed that promotional tag. He’s sitting firmly in the driver’s seat when it comes to his very own style. You can easily dub his beats trademark, bowing to the craftsmanship M.in has developed and refined with his dozens of releases. His artist name playfully quotes the minimalism that ruled for long time in German electronics. In fact, M.ins tracks are far from minimal. The only minimal formulae is his credo demanding “the groove to carry the whole track from the core”. From there on, anything can happen! And M.in is known to churn out tracks that conquer hearts and souls with various ingredients: groove, swing, bite, humour and musicality.

„Every track has to have a vibe first““, he says. Well, easy to sign that partition... yet hard to accomplish the task M.in so easily masters. Whether it is more house or techno, whether M.in produces or rocks the worldwide clubs, his sound remains a „spiritual thing“. And that is indeed today’s currency for worthwhile club sounds. Thus, M.in’s playful and viby sounds sent him round the world lately Weekly gigs in Germany and across Europe. Tribal, jazzy, playful, weird or whatever, music with an „obsession for smiling faces"!