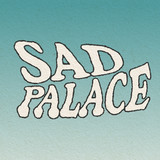 Always aiming for the best of both worlds, Gosport’s Sad Palace combine eccentric pop grooves, imposing riffs and whatever else they can get their hands on to produce complex, psych-laced pop songs.

Sad Palace release their debut EP ‘Longbaby’ in May 2019, following a string of singles released by Kissability and Kitsuné and backed by BBC Introducing and Amazing Radio. Taken from tracks written across a period of two years and recorded in four days at Press Play Studio, influencers of the five track EP include artists such as Peace, American Football, The War On Drugs, Ratatat and Late of the Pier.