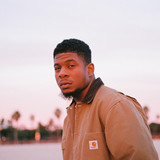 Over the past decade, Mick Jenkins has made a name for himself through the unflinching and clear-eyed poeticism of his music. His voice is resonant, commanding a sense of authority, or at least a confidence, that allows him to mine his experiences and those of others in quest of higher truths. Yet, some topics are always going to be hard to talk about, and his latest album Elephant in the Room is about facing those things head on. Reeling from issues both personal and societal, the Alabama born, Chicago raised rapper spends the length of the album laying his burdens down. There are songs like “Things You Could Die For If Doing While Black,” a sobering distillation of the everyday actions—going for a jog, sleeping, crossing the street, calling for protection—that have become fatal for Black people. And songs like “Scottie Pippen,” a soulful slow-burner that Jenkins used to atone for mistakes he's made. “Men have a much harder time dealing with their emotions. We know this, and we know things that men do to keep this going and we never talk about,” he says. “It's a moment for me to address my wife for something that I was terribly wrong about because that's what kind of things have happened in our household. And that's really what I wanted to do—speak directly to the things that we don't speak about often.”