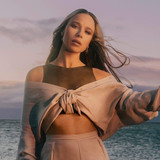 With her hypnotizing voice, and soulful melodies, GDRN has rocketed on to the Icelandic music scene. Swirling in a sea of luscious harmonies and sleek, modern trap beats, GDRN’s music is slightly anachronistic and highly addictive. GDRN played classical violin for over 10 years until she began studying both jazz-singing and jazz-piano which ultimately lead her to start a singing career in 2017. After releasing her first single “Ein” in 2016 and before releasing her first album “Hvað ef” she was nominated for the Newcomer of the year at the Icelandic Music Awards 2017. She released her first album “Hvað ef” in August 2018. “Hvað ef” is a collection of beautifully emotional songs with lyrics that are at once introspective, luscious, subdued and optimistic.   Her debut album won Album of the Year at the Grapevine Music Awards and the album was nominated for the annual Nordic Music Awards, which honors full-length albums from the Nordic countries. At the Icelandic Music Awards 2019 she won 4 awards for both album and song of the year as well as video of the year for “Lætur mig,” and best female vocalist in her category. In February of 2020 GDRN released her highly anticipated sophomore album “GDRN”. It had 10 songs and they filled up the first 10 slots in Iceland top 50 Spotify playlist for the first week.   For bookings & info: gdrnmusic@gmail.com