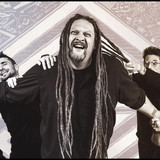 Snap Border is an alternative rock band founded in 2012. Its style is a powerful mix of genres that allows it to create its own universe with a striking and a communicative aesthetic which is easy to understand. Snap Border released their debut album,

Alternative Current Box in 2016, which was acclaimed by critics and toured the stages. The band is now back in studios to record their new EP Icons with Anthony Chognard & CHS prod (Smash Hit combo, Tess, ...). The first single