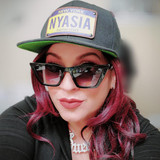 NYASIA has been singing professionally for the past 30 years. 1990, Nyasia was signed to Mic Mac Records with her debut song, "NOW

& FOREVER", going number one in Miami, Brazil, Chicago and Texas. 1991, her second single, "WHO'S GOT YOUR LOVE", crossed over in California then New York entering the top ten. This track charted on BILLBOARD, "Hot 100 Airplay" & "Billboard Hot 100". This quickly spurred into her first international tour in Rio De Janeiro, Brazil which was for 10 days. 1991, a "self-titled", debut album, spawned eight 12" singles with countless remixes catering to both the East and West sound. One remix in particular for "Who's Got Your Love" was the beginning of Power 96's DJ Lazaro Mendez' path to the now infamous DJ, producer and artist. 1991- "Nyasia" album (MIC MAC) 2010- "This Is Me" album (TAZMANIA) Singles: 2010- 99 1/2 2013- I NEED YOU 2014- HEARTBREAKS w/George Anthony 2016- REMEMBER w/TST 2019- THIS LOVE WILL NEVER BE 2021- TIME Nyasia continues to bring her passion with music and still tours all over the states & internationally in clubs and in arenas. Her goal has always been to entertain, giving back to the community, promote the music she loves & MOST IMPORTANTLY, always stay connected to her fans... Links: www.Nyasia.Net www.facebook.com/NyasiaFreestyle www.tiktok/@NyasiaFreestyle www.twitter.com/NyasiaFreestyle www.instagram.com/NyasiaFreestyle Bookings: NyasiaMusic@yahoo.com