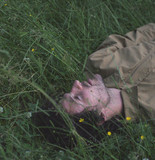 From street performing troubadour to alt-pop indie darling, the Danish artist, Favor, creates an emotional throwback sound with contemporary sophistication. His music has gained an international fanbase among indie tastemakers leading him to support acts such as Sigrid, The Japanese House and releasing his debut album Crush. "Favor makes pop music look playfully easy - he has truly mastered the art." - Undertoner  Favor has built a loyal following with his extroverted live performance along with buzzed-about 2018 EP Lightweight for the Heavyhearted. He followed up with the single Wiki, which pulled him into indie pop major league and setting the scene for the release of his debut album released March 2020. “Favor’s debut album is filled with details and the perfect soundtrack for the arrival of Summer.” - GAFFA Magazine  Favor is the moniker of Danish songwriter Jeppe Hvirvelkær. He was born into a mixed musical family, growing up with his dad being a 70s folk-rock man and his mum being a worshipper of 80s pop ballads. After having followed his dad’s band on the road from the age of 11, the young artist started writing his own music. In 2015, he went on a self proclaimed world tour for two years as he played his way through the streets of New York, Rio, Istanbul, Rome and Sydney. Finally meeting a producer in 2017 on an open mic night in London, Hvirvelkær was brought into the studio and out on the Copenhagen music scene.