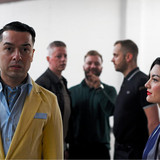 Influenced by the Specials, Public Enemy, and the Clash, London collective the King Blues combine folk-punk, Two-Tone, and dub reggae with overtly political lyrical themes -- creating a sound they describe as "conscious rude boy ska." The band originally formed as a duo in 2004 before vocalist/ukulele player Jonny "Itch" Fox, and guitarist Jamie Jazz decided to expand their sound, recording with a number of various musicians before settling on the permanent lineup of guitarist Dean Ashton, bassist Kat Marsh, keyboardist Josie Dobson, and drummer Jack "Percusher" Usher. In 2005, they released their debut EP, All Fall Down, which was later followed by their 2006 full-length album, Under the Fog. After signing with Island subsidiary Field Recordings, the album was reissued a year later. Following support from influential Radio 1 DJs Zane Lowe and Mike Davies, they scored a couple of minor hits from their follow-up, Save the World, Get the Girl ("Headbutt" and the title track) in 2008. A Live Lounge cover of Dizzee Rascal's "Bonkers," which they regularly played in their live set, became their most famous recording, and in 2011, they released their third LP, Punk and Poetry, through indie label Transmission. At the beginning of 2012, the band headed to California to record with producer John Feldmann (the Used, Good Charlotte) for their third album. Releasing a statement in April 2012, the band decided to go their separate ways; the album Long Live the Struggle appeared as a parting shot. However, it wasn't their final chapter. The band reunited three years later, reinvigorated by a desire to "take down" the ruling Tory government. Their fifth album, The Gospel Truth, appeared in 2017. ~ Jon O'Brien, Rovi