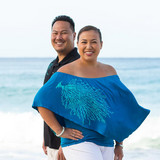 Kūpaoa are a traditional Hawaiian folk duo based in Honolulu. The group was originally formed as an ensemble by singer/guitarist Kellen Paik in 2005 to perform at a friend's wedding. When two of the assembled bandmembers were forced to drop out before the performance, it was left to Kellen and college friend Līhau Hannahs to carry on as a duo, with Kellen on guitar and vocals and Līhau learning to play the bass as she went along. Līhau had never before sung or played in front of an audience, so a slot was hastily booked at a local open mike to act as a sort of rehearsal. Their breezy harmonies and gentle arrangements at both the practice gig and the wedding were so well-received that the two immediately picked up a number of other engagements, and were soon playing monthly at a local bar and doing weddings and private parties on weekends. They adopted the name Kūpaoa, a Hawaiian word which describes a strong, lingering fragrance, and eventually released their debut album, Pili O Ke Ao, in 2008. A mix of traditional island songs and original material written in the Hawaiian language, the album was nominated for four prestigious Nā Hōkū Hanohano awards, going on to win the award for Most Promising Artist of the Year the following year. Shortly after the June 2010 release of their second album, English Rose, Kellen and Līhau were married, beginning a new chapter in their story. Signing with Honolulu-based label Mountain Apple Company, their music was gaining exposure outside the Hawaiian islands, and the couple began performing stateside as they first released 2011's Hāliu, a collection of songs only sold at shows, followed by their third major release, Bumbye, in 2013. In 2014, Kūpaoa recorded with Japanese Hawaiian folk group Kaulana to release the collaborative album Nā Pua Mōhala. ~ Timothy Monger, Rovi