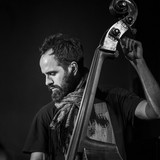 Manel Fortià - Bassist, composer, educator Manel Fortia is an expressive and melodic bassist based between Barcelona and New York with a long career as a performer and improviser in jazz that has led him to play with some Grammy Awarded and Nominated musicians such as Dave Liebman, Chris Cheek, Arturo O’Farrill, Chano Dominguez, Eliot Zigmund, Bill McHenry… among many others, and played in some of the most important International Jazz Festivals. He has also led his own projects and has been recognized with multiple awards. His approach of extended techniques at doublebass and his creative experimentation combined with a huge melodic sense and deep sound has converted him in one of the most unique and original bassist of the new generation.