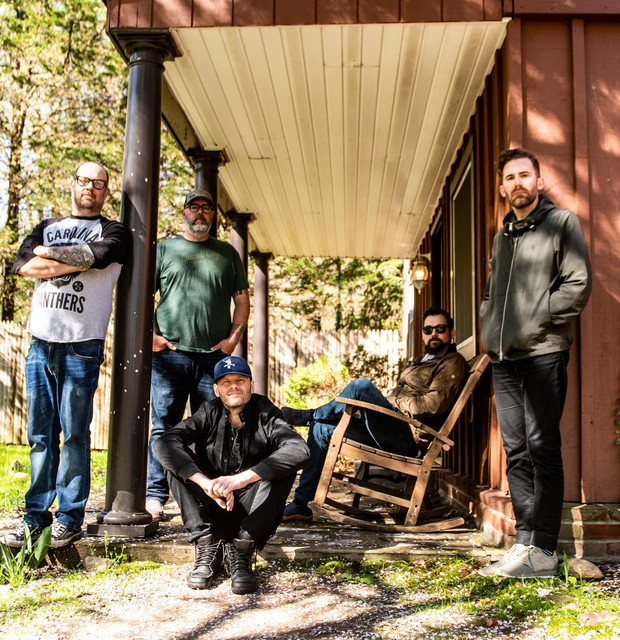 Hopesfall formed in 1998. Over the next decade, the band would undergo numerous line-up changes but always drew from the same core group of lifelong friends to source new members. The bond between the group was so strong that even after disbanding in 2008, guitarists Joshua Brigham and Dustin Nadler and drummer Adam Morgan continued to get together on Wednesday nights to work on new music despite having no plans to release it. It was during these jam sessions that the music that would eventually find its way onto Arbiter first began to take shape. In 2012, Brigham and Morgan visited frontman, Jay Forrest, in Chicago culminating in the decision that Forrest would add vocals to the demos. The lineup for the band’s reformation would then be cemented in August of 2015 when bassist, Chad Waldrup, joined the group to see Hum and Failure. Still, the idea of putting out new music as Hopesfall wasn’t part of the plan. With the lineup complete, the band brought their demos to another trusted collaborator - producer Mike Watts (Glassjaw, Dillinger Escape Plan, O’Brother) whom they had worked with on two previous releases, Magnetic North and A Types. It was Watts who brought the demos to Dan Sandshaw and Will Putney of Graphic Nature / Equal Vision Records where the idea of releasing it as a Hopesfall record was finally discussed. A testament to the band’s hard-earned legacy, the famed label immediately jumped on the opportunity to release the project.