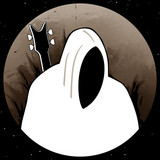 Dark Athame is a heavy rock and metal band that consist of a Swede, a Norwegian and an American. Their influences range from 70s prog rock to modern metal. Their debut album was released July 16th 2021. The project that has become Dark Athame started in August 2018. Oskar Andersson and Jan Inge Bjørkeland began making music based on an old piano demo by Oskar from over 20 years earlier. The demo materialized into a full instrumental track, with Jan Inge playing guitars, and they soon realized that the project had gone past being just a little experiment. After they felt enough tracks had been produced to show their versatility, they began searching for a singer and lyricist. They announced on social media, and got the biggest interest from the various Reddit communities. Three vocal demos soon found its way to their inbox, and they decided to reach out to Shawn Hall, who sent one of those demos. Oskar and Jan Inge was thrilled to hear that Shawn wanted to join and make it a three-piece band as of July 2019. Oskar continues to make small demos and snippets of music, programming and playing keyboards, which Jan Inge gets inspiration to build upon making new riffs and solos playing bass and guitars. Together they compose, produce, record and mix all music of Dark Athame. Shawn writes and produces all lyrics and vocal tracks for their songs, recording them in his own booth.