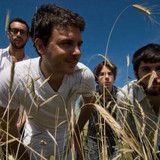 As Tall As Lions

Featuring As Tall As Lions

Rock quartet As Tall as Lions formed in 2002 in Long Island, NY. The band's original lineup consisted of Daniel Nigro (vocals, guitar, piano), Saen Fitzgerald (guitar), and Clifford Sarcona (drums). After recording the Blood and Aphorisms EP, the bandmates soon landed a deal with Triple Crown Records and released the Lafcadio LP in spring 2004, and As Tall as Lions' lineup finally settled with good friend Julio Tavarez on bass. As Tall as Lions, their self-titled follow-up album, arrived in August 2006, followed by several years of touring and an appearance on Jimmy Kimmel Live. The band's third album, You Can't Take It with You, appeared three years later, finding the group focusing more heavily on dark and moody R&B-influenced songwriting, followed by dates with Silverchair and Mutemath, and a performance at the revered Coachella Festival. Ultimately, the band parted ways amicably in 2010, citing a desire to follow new ventures. Cliff and Julio started The Black and the White among other projects, while Dan and Saen decided to focus on music production and song-craft.