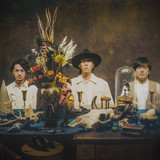 Japan's Radwimps plied a technical, angular, often abrasive brand of indie rock with emotive, literate lyrics, which brought them huge chart success in their own country, and respectable sales overseas, despite none of their albums ever being officially released outside of Japan. Following their eponymous 2003 debut, the group broke into the Japanese mainstream with third effort Mujinto ni Motte Ikiwasureta Ichimai, their first platinum-certified set. From there, each platinum release climbed further up the charts until they started a number one chart-run in 2016 with Your Name, the soundtrack to the anime of the same name. Radwimps were formed in Yokohama in 2001 by five schoolmates: vocalist Yojiro Noda, guitarists Akira Kuwahara and Yuusuke Saiki, bassist Kei Asou, and drummer Akio Shibafuji. Noda, who wrote all the band's music and lyrics, became a singer after getting into Oasis in middle school, and was asked by the others to be the vocalist. (Later, he started playing guitar in the band in addition to singing.) Radwimps started performing while still in school and won the grand prize in the 2002 Yokohama High School Music Festival with their song "Moshi Mo," which they released as their first single. Their self-titled debut album followed in 2003 before the band went on hiatus so the members could focus on their exams. When they regrouped in 2004, Saiki, Asou, and Shibafuji declined to return. Saiki was not replaced; Yusuke Takeda and Satoshi Yamaguchi joined, on bass and drums, respectively, after which the lineup remained stable. The band's second album, Hatten Tojou, was released in 2005 and they undertook a large-scale tour, playing at several large music festivals. Their growing success attracted the attention of EMI, which signed them and released their third album, Mujintou ni Motte Ikiwasureta Ichimai, in 2006; it debuted at number 13 on the Oricon chart. Major-label success did little, at least initially, to make the band's sound more commercial; if anything, it seemed to have the opposite effect, as they released several albums of rather experimental rock. Despite the sometimes difficult nature of their music, their popularity only continued to grow, particularly among young people; perhaps due in part to their own youth -- their core audience comprised teenagers. Their fourth album, 2006's Okazu no Gohan, debuted at number five, with 2009's Altocolony no Teiri and 2011's Zettai Zetsumei each debuted at number two. In 2008 they scored their first number one single with "Order Made." Noda, who had lived in the United States for three years as a young boy, had long wanted to tour the West, but his bandmates expressed little interest, despite their relative popularity there. In 2013, after the release of Radwimps' seventh album, Batsu to Maru to Tsumi To, Noda decided to go it alone, launching his solo project Illion with the album Ubu. A second Illion album, 2016's P.Y.L., followed before Radwimps returned with two new albums released just a week apart: the first a soundtrack album to the 2016 anime film Your Name, the second their eighth studio album, Ningen Kaika. The film was an international success, further boosting the band's global profile and sending them to number two on the Billboard World Albums chart. Human Bloom became their seventh platinum-certified effort and second straight chart topper. In 2018, the band added another number one to their list with Anti Anti Generation. Arriving at the end of the year, Anti featured guests Taka (One OK Rock), Aimyon, Tabu Zombie, and rapper Miyachi. ~ John D. Buchanan, Rovi