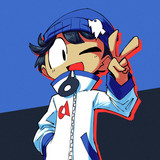 Similar Outskirts is a California-based music artist who has been writing music since September, 2012. His passion for music has led to several works that are both "melodically catchy" and "bass-heavy." Though his discography is both bright and dark, all of his tracks are full of energy. Similar Outskirts has made steady growth in the dance music community. Although the EDM scene is polarized by both darker and brighter music, he aims to combine the two cohesively. His vision has turned some heads as seen by the success of his 2018 Horology EP. Released on Rushdown, a record label owned by UK-based artist Chime, the EP raises support for the colorful side of bass music. This sense of "color" persists with his sophomore Rushdown EP, Titans EP, which attempts to expand upon the combination of dark and bright music through video game themes and ideas. As time passes, Similar Outskirts looks forward to a bright future filled with fantastic music that is sure to leave an impact on the dance music community. Photos by @eeveevision