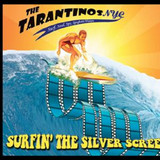 Yes, Tarantino music is it's own genre. Ask the many ad execs who pick up on the latest from every Tarantino film and use it. There are great songs that have singing in them too, but we don't do those.