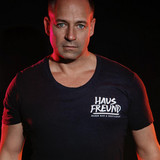 Although better known by many as a place of oompah bands and lederhosen, Munich also has plenty to brag about when it comes to house music. One of its best-known DJs and producers is Tom Novy, who first started working the city's club circuit as a teenager in the late '80s. He has since strutted his stuff at some of Europe's most celebrated venues and festivals and made a telling impact on dance charts worldwide. Starting off as a hip-hop DJ, Novy gradually switched his focus to house -- his first single, "I House U," a hit in the clubs, was released in 1995 and carried a sample by hip-hop legends the Jungle Brothers. Novy then served up the singles "The Odyssey" (1996) and "Creator" (1997), both released as the official anthems of the popular Rave + Cruise dance music event. His fortunes, however, sky rocketed after he met talented Kosmo Records producer Eniac, a migrant to Munich from the former East Germany. Working under the moniker Novy Vs. Eniac, the duo became stars after springing the catchy house track "Superstar" onto the world in 1997. The song made it to the number one spot on dance charts all over Europe, and appeared in the Top Ten on dance charts in many other countries, including the U.S. and Canada. Though not as big, the follow-up single "Someday Somehow," with Munich DJ Virginia on the vocals, proved a fair success in clubs around the world, including on the famous Spanish party island of Ibiza. In 1999, Novy and Virginia struck another winner with the vocal house number "I Rock"; in some countries, the song sat in the Top Ten for well over two months. Novy then collaborated with vocalist Lima on two successful club singles, "Now or Never" (2000) and "Welcome to the Race" (2001). ~ David Peter Wesolowski, Rovi