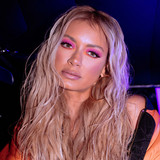 Havana Brown has always done things on her terms. From carving out a career on the club circuit to signing a major record deal and touring the world, she’s been able to turn her insatiable passion for music into an incredible and enduring career.   With more than 294 million streams of her tunes, 3.2 million singles sold and nearly a million passionate Facebook fans, Brown is one of Australia’s greatest musical exports. The Melbourne-born, LA-based artist has toured with the pop world’s biggest – including Britney Spears, Rihanna, Beyoncé and The Pussycat Dolls – and scored big hits with her original tunes “We Run The Night" (triple platinum), which sold over a million in the US, “Warrior" (double platinum) and “Big Banana" (platinum).   Following on from her four consecutive Billboard dance hits, Brown presents her boldest move yet, with the hip-hop/RnB single “GLIMPSE". Sexy, sassy and instantly infectious, the tune is a seductive anthem that celebrates living your best life.