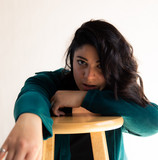 A long and restless night is a fitting metaphor for the last year, as the world experienced a collective warping of time and place. Doing what artists do best, indie-pop duo Roses & Revolutions (longtime collaborators Alyssa Coco and Matt Merritt) transformed their dystopian feelings into a thing of beauty. Their latest recordings unfold like a short film noir, which not only sets a palpable mood, but also cycles through a wave of emotions. Roses & Revolutions craft a darker kind of singer-songwriter sound, though any one genre does not capture their full range. With

sweeping nostalgia, Roses & Revolutions invites us into their world, which feels both like a vast desert landscape, and an intimate space among friends. Roses & Revolutions music has also been licensed to a wide variety of networks including Netflix, ABC, NBC, MTV, VH-1, Lifetime, Hallmark and CBC and has been featured in Paste, Yahoo! Music, Atwood and American Songwriter.