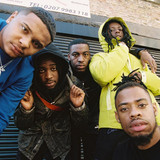 Collectives come in many forms. Anarchists, the Power Rangers, spiritual groups – you name it. But, when it comes to British rap group House of Pharaohs, there isn’t really any historical precedent. They’re not making grime. They’re not on drill, and they’re not on road, either. House of Pharaohs is an entity made up of solo artists – each of whom has their own unique tastes and personalities – who come together to create something unique. Alongside the music, there’s also their in-house team. They’re managed by long-term friend G-Lo, while three other people work on the creative, clocking the House of Pharaohs membership up to a total of ten individuals. Whey they come together, think of their music as a specific and wholesome dish with each character adding their characteristics and nuances to the flavour. In other words: it’s just different. As a group, House of Pharaohs aim for substance. They have grand ideas too. You might have seen them in the famous Nothing Beats a Londoner Nike advert last year, and you might see them in more video stuff too – this time in proper acting roles. They’ve an inspiring and intriguing prospect, with a singular, positive vision – one based around self-development as much as it is music. “We aim to be the best as we can as people. And so, House of Pharaohs allows people to feel other ways and express themselves individually, too. That’s our art.” BlazeYL | Sam Wise | Bandanna | Danny Stern | Kevin Taylor