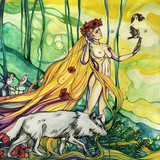 Arabs in Aspic is a heavy progressive rock band from Trondheim, Norway, with their musical roots planted firmly in the golden era of rock. Their sound is a sweet mixture of loud, heavy guitars, percussion drums, 12 string acoustics, funky bass and percussion, screaming hammond organs, soft Rhodes, mellotrons and 70's synths, topped with a bucket of vocal harmonies. ARABS IN ASPIC emerged in 1997 from Norway led by guitarist and vocalist Jostein Smeby and rythm guitarist & Theremin player, Tommy Ingebrigtsen. Since they met through their common love for 1970s heavy rock music, especially Black Sabbath, they've been playing together with different personnel, each playing different kinds of heavy music until ARABS IN ASPIC surged. They said goodbye to playing covers and the band was ready with Hammond organ player Magnar Krutvik, drummer Eskil Nyhus and his brother, bass player Terje Nyhus. The quartet was later joined by Stig Arve Jorgenson on backing vocals and Hammond organ, as Magnar changed to playing acoustic guitar and synth. After a few years and two releases (Progeria, EP and Far Out in Aradabia, CD) the band was put on hold due to various reasons. In 2006 Jostein, Eskil and Stig hooked up with bass player Erik Paulsen and formed what was known as Arabs in Aspic II.

This line-up is almost unchanged as of 2020 except for the fact that Alessandro Elide joined the band on percussion in 2019.