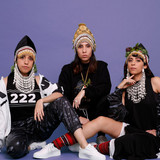 The Yemenite-Israeli sister trio Tair, Liron, and Tagel Haim, also known as A-WA that took the world by storm sing in the Yemenite Arabic dialect while mixing electronic dance music and hip-hop beats with folkloric and original melodies. Growing up in the remote village of Shaharut in the Arava valley gave way for a unique childhood with the bare desert landscape acting as a blank canvas for their creativity. Their first album ‘Habib Galbi’ was released in 2015 to much international acclaim. A-WA has since been featured in magazines such as Rolling Stones and Vogue, and has performed in festivals worldwide such as Womex, SXSW, and the International Jazz Festival in Montreal. The past two years have been instrumental to their career, performing nationally and internationally, while working on writing, composing and recording their new album, produced by Tamir Muscat (Balkan Beat Box). Their new single ‘Mudbira’ is accompanied by a breathtaking original clip, art directed by the sisters themselves - a testament to their overarching creative oeuvre.