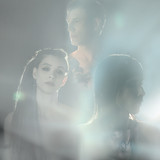 Formed in Hartlepool, UK, Sneaker Pimps immediately emerged as a musical force and pioneer of the trip-hop genre with their debut album ‘Becoming X’ (1996). Known for clever sampling, bittersweet melodies and a moody sound which intricately combined organic/electronic production and morphed between female and male vocal performances, they landed in the UK Top 40 five times during their initial seven year run with tracks such as ‘Six Underground’, ‘Spin Spin Sugar’, ‘Low Five’ and ‘Bloodsport’. After a mutual decision to explore other avenues, both founding members Chris Corner (IAMX) and Liam Howe (AMP) went on to create their own highly successful musical and visual projects collaborating with artists as diverse as Gary Numan and Lana del Rey. Now based in LA and London respectively, Sneaker Pimps have reunited and,

alongside newly-added vocalist Simonne Jones, are set to release their long-anticipated fourth album, ‘Squaring The Circle’. The double album will be out Fall 2021.