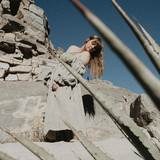 Hailing from Phoenix, Arizona, Courtney Marie Andrews is a singer/songwriter known for an eclectic style that incorporates elements of folk, country, and indie pop. Andrews began penning her own lyrics in her early teens, and began touring at the age of 16. She would

eventually make her way east to New York City, landing work as a backing singer and session guitarist for many established artists, including Damien Jurado and Jimmy Eat World.