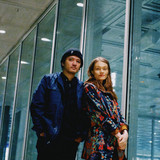 Mandy and Diwas never meant to be in a band together. When they met in Ithaca NY, Diwas was a guitarist in a psychedelic rock band and Mandy was studying botany with music the last thing on her mind. Sometimes life happens to us in ways we don't expect, and certainly neither of them expected that soon they'd be writing songs together, playing live looping shows around town, and staying up all hours of the night producing songs on an old macbook. With a true DIY 'bedroom' recording approach they spent years growing a home studio that doubled as an actual studio apartment in Brooklyn NY. Their process can be described as obsessing over tracks in ableton live, deleting said tracks and starting over, dreaming about plugins and gear they don't have, and constantly running out of CPU power! After meeting drummer Steven Bartashev and playing around NY as a trio, they recorded EP 'Everyday Visions' which features Bartashev's drums on 'Want you to Know' and 'Grindstone' and 'Trees.' In 2021 they will release their third EP, titled 'No Shadow' scheduled for late spring.