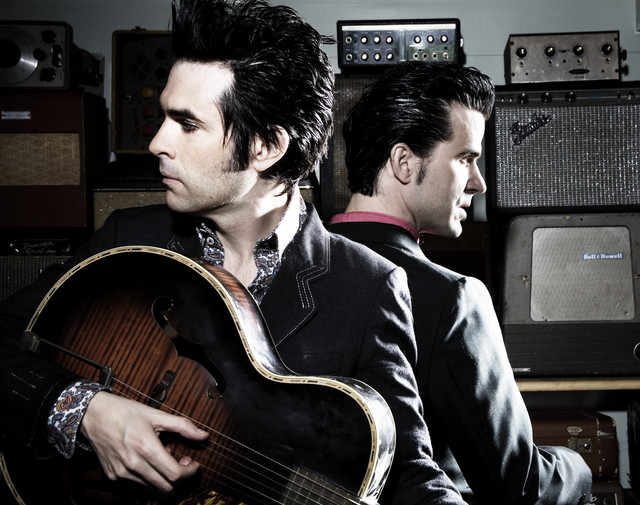 A meeting of the minds between two musicians who explore the nexus between punk rock and roots music, Heavy Trash is a collaboration between Jon Spencer and Matt Verta-Ray. Spencer first attracted the attention of adventurous music fans in 1985 with his primitive guitar work and raw vocals with frantic noise merchants Pussy Galore, but when the band split in 1990, he joined forces with guitarist Judah Bauer and drummer Russell Simins to form the Jon Spencer Blues Explosion. Melding R&B accents and Spencer's feral blues wailing with a fractured but potent post-punk attack, the Jon Spencer Blues Explosion became one of the most acclaimed and controversial indie bands of the 1990s. Strong as the Blues Explosion were, Spencer was always on the lookout for new avenues for his music and during his downtime he also performed and recorded with R.L. Burnside, Boss Hog, the Gibson Brothers, Dub Narcotic Sound System, and Spencer Dickinson. In 2005, Spencer began writing and recording material with Matt Verta-Ray, who played bass with the acclaimed alternative group Madder Rose on their first two albums as well as handling guitar chores for the more hard-edged blues-punk band Speedball Baby, who had toured with Blues Explosion. (In addition, both Spencer and Verta-Ray had recorded with R&B sleaze legend Andre Williams; Spencer contributed to his 2000 album The Black Godfather while Verta-Ray lent his guitar skills to 2001's Bait and Switch.) Spencer and Verta-Ray named their collaboration Heavy Trash, and in 2005 they released their first album, simply titled Heavy Trash, which eased back on the blues textures of their earlier work in favor of a pronounced rockabilly and honky tonk flavor; the album was also engineered and co-produced by Verta-Ray at his recording studio, N.Y. Hed. In 2007, Heavy Trash returned with a second album, Going Way Out with Heavy Trash. They cranked out another record soon after, but 2009's Midnight Soul Serenade turned out to be their last for a while. They continued to grace stages around the world with their raucous sound, launching a short tour yearly. In 2015, Noir!, a short collection of unreleased songs, outtakes, and fooling around, was released on LP by Bronze Rat. ~ Mark Deming, Rovi