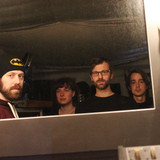 Griswold are, strictly speaking, no newcomers – indeed, the band members have been making music together for half their lives. Griswold’s multifaceted music contains elements of experimental indie-pop and jazzy folk-rock. In today’s fast-paced music industry, Griswold are unique in taking their time to develop their own, distinct sound over the years. The occasional overlap with the latest trends is coincidence rather than intent. Like a sponge, the band members absorb the various styles of music and create something new and unique. Griswold is formed of Uwe Lukatsch (vocals, guitar), Michael Jedelhauser (guitar), Kerstin Petzold (bass), André Schindler (drums) and Christoph Rick (saxophone). Incidentally, the name Griswold is derived from the well-known film family around Chevy Chase. As the band was still without a name with their very first gig just around the corner, they decided on “Griswold” as a temporary solution. A lot has changed since, but the name has stuck.