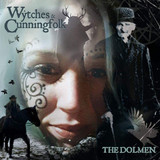 The Dolmen are a relentless organic Celtic rock band born from the county of Dorset, England. Their mission has been to infiltrate the minds and souls of a growing audience with their tribal rhythms and powerful spiritual renditions. The Dolmen was founded by prolific song writer & lead singer, Taloch Jameson and after a few changes over the years, the current line up has been solid since 2010 when drummer, Chris Harris, joined The Dolmen experience. Josh Elliott, lead guitarist, joined The Dolmen family in 2009 and Kayleigh Marchant, bass guitar & vocals, became a member in 2008. After breaking into Europe The Dolmen then found Anja Novotny, flutes & keyboard, in 2015. Their latest album ‘NUADA’ released in in December 2016 is emblematic of their success, and testament to the band's artistic evolution and enthusiasm, described by Van Muylem of SNOOZECONTROL “as an exceptional trip”. The release of ‘NUADA’ has also found The Dolmen nominated in the ‘Bastaard Fantasy Awards’ for best album internationally and nominated best live act internationally. Which they both won. 2017 brougth The Dolmen to Wacken Open Air where they gigged for 3 days for thousands of people. The Dolmen now continue to grow as they continue their journey into more of Europe and around the UK.