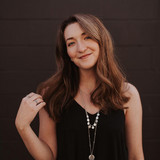 Storytellers from the Americana tradition have time and time again written timeless songs that speaks to a universal truth. Meg Renee, an aspiring young singer-songwriter based in Nashville, Tennessee, is attempting to do just the same with her latest batch of songs to be released this Fall. These songs can only be described as classic but current. With a voice that reminds listeners of Dolly Parton, Patty Griffin, and Emmylou Harris and music that fits right alongside famed singer-songwriters like Jewel, Grace Potter, and Sheryl Crow, 24 year old Meg Renee synthesizes both old and new sounds in her upcoming album Alternate Universe. There are elements of Pop, Rock, Country, Americana, Folk, and Blues, but what truly makes this music stand out is the content. As a true songstress, Meg blends reality in her songs, writing about characters straight from her imagination to make a universal point about life and love's hardships as well as her own personal experience with heartache, feelings of inadequacy, and lots of anxiety. Meg released her new single, You Got Two, in April on all streaming platforms, and has been enjoying sharing the first of the new music she is planning to release from her upcoming album. She hopes to grow her audience, especially in Nashville as well as continuing to co-write with other artists.