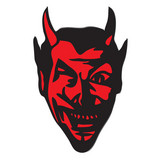 The members of hard rock/stoner metal outfit Fireball Ministry christened themselves with religious titles (bishop, reverend, and sister, etc.) in keeping with their band name, and issued their debut album, Ou Est La Rock?, in 1999 on Bong Load Records. A deal with Nuclear Blast surfaced in 2002, and The Second Great Awakening, which was produced by Grammy Award-winning Nick Raskulinecz (Foo Fighters, Queens of the Stone Age, System of a Down), marked Fireball Ministry's second album in 2003. 2005's Their Rock Is Not Our Rock featured the single "The Broken," which appeared in the 2006 WWE video game SmackDown vs. Raw. 2010 saw the release of the band's eponymous fourth studio long-player, and in 2017, after a lengthy hiatus, they returned with the full-length Remember the Story, which was released on Cleopatra. ~ Steve Huey, Rovi