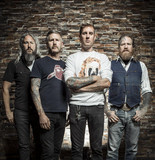 Appearing near the dawn of the 21st century, Atlanta's Mastodon established themselves as one of the most original and influential American metal bands. Their wide-angle progressive approach encompasses stoner and sludge metal, punishing hardcore and metalcore, neo-psych, death metal, and more -- sometimes in the span of a single song. The group's playing style incorporates heavy, technically complex guitar riffs, lyric hooks, long, melodic instrumental passages, and intricate, jazz-influenced drumming with syncopated time signatures. Their second album, 2004's Leviathan, was a concept offering based on Moby Dick, Herman Melville's iconic novel of whaling and obsession, and proved the band's commercial and critical breakthrough. Since its release, the record has attained status as one of the most important albums in heavy metal's history. 2011's concept album The Hunter reflected the band's embrace of prog, channelling disparate influences ranging from King Crimson to Opeth. 2017's Emperor of Sand netted two charting singles, debuted inside the Top Ten on the Top 200, and was nominated for a Grammy for Best Rock Album, while the single "Sultan's Curse" took a Grammy home for Best Metal Performance. Never staid and always restless, Mastodon embrace change readily, and employ its more useful lessons without regard for musical trends, production techniques, or popular or critical approval. Change and evolution (their raison d'être) are as much a part of their musical identity as their personnel. Mastodon formed in 1999 around the talents of guitarist Bill Kelliher, drummer Bränn Dailor, bassist/vocalist Troy Sanders, and guitarist/vocalist Brent Hinds. One of the more notable New Wave of American Heavy Metal acts, a genre spawned in the mid-'90s by bands like Pantera, Biohazard, and Machine Head, Mastodon's innovative, lyrically astute blend of metal subgenres helped position the band as one of the pre-eminent metal acts of the early 21st century. Formed out of a mutual admiration for the Melvins, Black Sabbath, Neurosis, and Thin Lizzy, Mastodon signed with Relapse Records (Today Is the Day, Dillinger Escape Plan, Coalesce, Burnt by the Sun) in 2001 on the strength of a four-song demo. The EP Lifesblood arrived that same year, followed by the group's full-length debut, Remission, in 2002. The album made positive waves in the metal community, but it wasn't until 2004's Leviathan that the band's eclectic brand of proto-metal began to enter the bloodstream of the entire music community. As polished and melodic as it was brutal and genre-defying, Leviathan, loosely based on Herman Melville's Moby Dick, signaled a turning point in Mastodon's career, appearing on critics' year-end Top Ten lists across the musical spectrum. Leviathan also featured a guest vocal appearance from Neurosis' frontman Scott Kelly, which marked the beginning of a tradition: He has appeared on each of the band's full-length recordings ever since. Mastodon's newfound popularity eventually landed them a deal with Warner Bros., but not before fulfilling their contract with Relapse in 2006 with Call of the Mastodon, a remastered version of the group's first two demo EPs, and Workhorse Chronicles, a DVD that chronicled the band's story thus far with interviews and concert footage. Their third album, Blood Mountain, debuted at number 32 on the Billboard charts and received a Grammy nomination in the Best Metal Performance category for the song "Colony of Birchmen." Blood Mountain marked the group's highest chart peak to date and set the stage for its long-awaited 2009 follow-up, Crack the Skye. In 2011, the band released the CD/DVD package Live at the Aragon, which was recorded in Chicago during the Crack the Skye tour. Mastodon quickly followed with new material, taking a step back from their more prog-oriented approach on their fifth studio album, The Hunter. It gave them huge commercial success, hitting number ten on the Billboard charts. Later in 2011, Troy Sanders took some time out from the band, forming the metal supergroup Killer Be Killed with Dillinger Escape Plan vocalist Greg Puciato, Soulfly's Max Cavalera, and former Mars Volta drummer Dave Elitch. He worked with the group on and off for the next few years; their debut album was eventually released in 2014. Mastodon was still a priority, however. After touring Europe and South America in 2012, they started work on their sixth album the following year with producer Nick Raskulinecz. The record, eventually titled Once More 'Round the Sun, was released in June 2014, preceded by the sludgy single "High Road." Over the next two years, several of the bandmembers' relatives suffered from cancer. Sanders' wife, Jeza, received treatment for breast cancer, recovering in 2015; the following year, Kelliher's mother died of a brain tumor, and Dailor's mother also received a diagnosis. These traumatic experiences informed the lyrics of the band's seventh album, Emperor of Sand, produced by Brendan O'Brien and released in 2017. Its concept, revolving around the curse placed on a wandering traveler by a desert ruler, was acknowledged by Dailor in interviews as a metaphor for cancer. The late summer of 2020 saw the release of Medium Rarities, a stopgap compilation of instrumentals, live tracks, and covers. Led by the previously unissued single "Fallen Torches" (recorded with Neurosis' Kelly as guest vocalist), the 16-song set included readings of Feist's "A Commotion," Metallica's "Orion," Flaming Lips' "A Spoonful Weighs a Ton," and "Atlanta" with guest Gibby Haynes. The comp also included "White Walker," which was used in the HBO series Game of Thrones. ~ James Christopher Monger & John D. Buchanan, Rovi