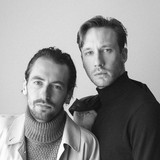 An inferno of will and intentions, all suppressed feelings, two dogs and a speed lane. Things that leads up to Need For Speed a two man gang from Malmö Sweden. Debut album 'Split Visions' to be released on the 29th of november.   It is chill pop music with a healthy dose of dark indie electronic RnB. ”Loved One” the second single from their upcoming debut album, the first one was called ”c/o. The upcoming album is co-procuced by Johan T Karlsson aka the artist Familjen and Joakim Lindberg.   Adrian Recordings has previously release the noir punk band RA where also Felix and Martin are members.   DAYLY TUNE Nothing But Hope And Passion   "It’s dark, heavy pop music, 80s-ish and dancefloor-friendly with a hint of the The Tough Alliance and late Lust For Youth."