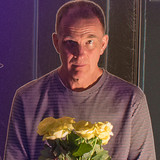 Andrew Stones is a British video, sound and mixed-media artist. His work is rooted in the close observation of nature, and informed by critiques of human overreach. Stones’s sound work shares features with musique concrète, electro-acoustic composition, classical minimalism, and various folk forms. His compositions follow the natural playing-out of physical phenomena in time, and the musicality of all kinds of materials in motion, often matching a singular image or idea (a wave, a helicopter, the traverse of an interior or a terrain) with a structural rule (to use only metal objects, or a particular set of numbers). Stones collects field recordings, and objects from which to create musical instruments. He has developed a working method that combines the physical and the digital, expressive and mechanically-actuated playing, the musically-familiar (piano, harmonium, struck/bowed strings) and the strange (feathers, machines, voices from history). Associated with the European video art scene from the 1980s onwards, Stones gravitated towards mixed-media installation, often using multi-channel audio. He exhibits solo, in the partnership Frances Hegarty & Andrew Stones, and in other public and collaborative settings. Stones’s audio work is released on the Salmon Songs label, alongside the music of his alter-ego Mister Salmon.