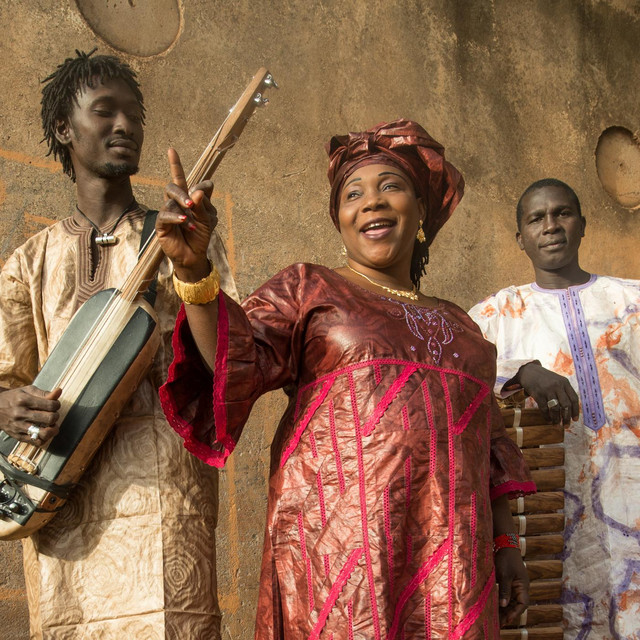 Trio Da Kali is a group of outstanding musicians from the Mande culture of southern Mali, who come from a long line of distinguished griots (hereditary musicians). Consisting of vocals, bass ngoni, and balafon they take their name from one of the oldest and most iconic praise songs in the griot repertoire, dating from many centuries ago. “Da kali” means “to swear an oath”, in this case, it is the griots’ pledge to maintain their art. All three Da Kali members come from celebrated hereditary musical families, and were brought together as a griot ‘super-group’ by Dr Lucy Duran on behalf of the Aga Khan Music Initiative (AKMI), which has an admirable track-record of commissioning and producing a variety of projects involving traditional musicians. Balafon player Diabaté was a long-time member of Toumani Diabate’s Symmetric Orchestra and has recorded with Salif Keita, Taj Mahal and many others. A musician of great subtlety and invention he has honed a virtuosic two-balafon technique to perfection. Bass ngoni player Mamadou Kouyaté is the eldest son of the instrument’s greatest exponent Bassekou Kouyaté, and he holds down the groove in his father’s band Ngoni ba. He is also involved in the thriving Bamako hip-hop scene. Singer Hawa ‘Kassé Mady’ Diabate is the daughter of Mali’s greatest traditional singer, Kassé Mady Diabate, and the power, range and phrasing of her voice led Harrington to compare her to the late queen of American gospel Mahalia Jackson.