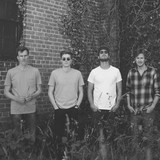 A hard-working Canadian roots rock outfit from Victoria, British Columbia, Current Swell formed in 2005 around the talents of Scott Stanton, Dave Lang, Ghosty Boy, and Chris Petersen. Employing an eclectic blend of blues-rock, folk, surf, indie rock, reggae, and ska, the band has drawn comparisons to everyone from Jack Johnson and Blitzen Trapper to Xavier Rudd and the Black Keys. Current Swell built their fan base from the grassroots level, performing at house shows, beaches, and wherever else the wind blew them, all the while developing a strong internet presence that's earned them devoted fans both regionally and internationally. They released their debut studio album, So I Say, in 2005, followed by Trust Us Now (2007) and Protect Your Own (2009), the latter of which spawned the hit single "Young and Able." 2012's Long Time Ago, the band's first worldwide release, resulted in a world tour that saw the group land festival dates in Europe and Australia. 2014's Ulysses was produced by Nathan Sabatino (Dr. Dog, White Rabbits) at Vancouver's Greenhouse Studios and featured the single "Rollin'." Recorded in Nashville and Vancouver with Grammy-winning producer Jacquire King (Tom Waits, Kings of Leon, Norah Jones), When to Talk and When to Listen, the group's third Nettwerk Records release and fifth outing overall, dropped in early 2017. ~ James Christopher Monger, Rovi