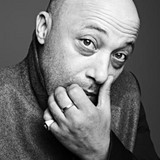 One of the founding fathers of Trip-Hop, Pussyfoot Records and his own children - Howie B had a busy 90's. Born in Glasgow, Howard Bernstein's association with Bristol club faves like Soul II Soul and Massive Attack helped fuel his fusion of soul, hip-hop, house, jazz, and funk. He launched his own label, Pussyfoot, in 1994, already having released tracks under his own name and through the noted outbound hip-hop imprints 2Kool and Mo'Wax. He'd also issued a small stream of material that moved hip-hop instrumentals one step beyond the experimental, thus joining Howie B with beat junkies like DJ Shadow, U.N.K.L.E, Portishead, and Coldcut at the forefront of a U.K. breakbeat renaissance. Now in 2018,

Howie has become a respected go-to for production and cinematic composition. His output has grown ever more diverse in scope in recent years, with projects including creating a score for a show at the Milan Planetarium, writing soundtracks for five Chinese feature films in the last couple of years as well as scoring independent films including ‘Dollhouse’, ‘How To Sell A Banksy’ and ‘Rabbit’ and most recently the end title music (co-written with Robbie Robertson and Matthew McConaughey) for Martin Scorsese’s film ‘The Wolf of Wall Street’. Most recently, Howie has relaunched his epic label from the 90's, Pussyfoot Records and has been created musical charity Intermission in Asia, which helps young musicians find their way onto the stage.