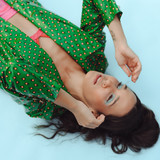 iLe is the stage name of singer, songwriter and rapper Ileana Mercedes Cabra Joglar. Before undertaking a solo career she was best known as a singer and rapper with Calle 13 under her nickname PG-13. (She is Visitante's [Eduardo Cabra Joglar] sister, and Residente's [Rene Perez] stepsister.) iLe's sound changes from release to release, but it's rooted in classic Latin styles. Her 2016 solo debut offering, iLevitable, looked back to deliver a meticulously crafted set of boleros and folk-inspired retro-pop songs that showcased her old-school singing and featured guest appearances by her father and brothers. It earned her a Latin Grammy nomination for best new artist, and won a Grammy for best Latin rock, urban, or alternative album. 2019's Almadura contrasted it with its predecessor by its canny use of sonic experimentation with electronics and through Afro-Caribbean and traditional Puerto Rican root sounds in rhumbas, bombas, and salsa. iLe is the daughter of actress Flor Joglar de Gracia and musician and producer José Cabra González. She is a formally trained singer. Her vocal and piano studies began while she was still in elementary school, where she sang in choir. In high school, she worked with Puerto Rican soprano Hilda Ramos and Cuban singer Gema Corredera (the latter of Gema y Pavel). Her greatest influence is the singer La Lupe. At 16, Residente picked her up from school and asked her to sing on a demo he and Visitante were working on. The track, "La Aguacatona," became Calle 13's calling card and they were signed to White Lion Records. Though younger than her brothers, she nonetheless became a collaborator on their singles and albums, and was featured in their videos. When not in school, she toured with Calle 13 as well, becoming an integral part of their stage show in several solo spots. In 2012, she participated in Puerto Rico's Banco Popular TV Christmas Special, and was chosen by boxer Miguel Cotto to sing the Puerto Rican National Anthem prior to his fight against Floyd Mayweather, Jr. In 2015, iLe announced her stage name and that she was recording a solo album of Afro-Caribbean boleros, boogaloos, mambos, and danzons with co-producer Ismael Cancel. Most were classic tunes, but there were also songs written by her father, sister, and grandmother, centering on themes of sexuality, love in many forms, and heartbreak. It was also an ode to the classics that shaped her musical heart. The set featured some of Puerto Rico's most famous musicians, including her father, brothers, Cheo Feliciano (in his final recorded appearance), Piro Rodríguez, Charlie Sepulveda, Bayrex Jiménez, and Ciro's Fofé Abreu. Her first single and video, "Canibal," was issued in April, followed by the release of the full-length iLevitable in June, which placed in the Top 15 of the Latin albums charts. In July, she followed it with the Kacho Lopez-directed video for "Te Quiero con Bugalú." After sold-out tours of several Latin American countries and the United States, two Grammy nominations and a win, iLe took a short break and returned to the studio. She and Ismael Cancel co-wrote and produced the political Almadura (its title is a play on the word armor, which literally translates as "strong soul") in the aftermath of Hurricane Maria. Its songs are filled with emotion, calls to action, and militancy for people who have been colonized by the United States for more than a century. Among its plethora of originals are the lead-off electro-bomba single "Odio" and the sultry salsa "Dejame Decirte," with Eddie Palmieri on piano (he also added an interlude to "Mi Novia"). Her sister Milena Perez offered the song "De Luna" and acted as a creative adviser. The lone bolero on the set is second single "Temes," and is non-romantic -- it literally translates as "You Fear" to fit the album's various socio-political themes. Almadura was released to universally positive reviews in May 2019. ~ Thom Jurek, Rovi