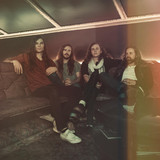 Makeshift Parachutes is Sharif O’Connor (guitar/keys), Daniel O'Connor (bass/vocals), Christian McCollum (vocals/guitar) and Arthur Brewer (drums/keys). Formed in 2013, in a wine cellar somewhere in the depths of Austin’s City Limits, the psychedelic quartet began piecing together their electric live show and having fun with effects/gear along the way. When the O’Connor brothers returned home to Aotearoa in 2015, McCollum and Brewer followed, and the rest is history. Since then, Makeshift Parachutes have shared a small catalogue of releases online, including ‘King Eeyore’s Xanax Party’ and ‘The Hole’ until they released their full- length debut album ‘The Daily Absurd’ in November 2019. Taking shape in the group’s A-frame shaped studio (which features in the cover art), the eight track opus collects the dusty remnants of millennial anxiety, surviving the 9-to-5 grind and navigating an unsettling socio- economic time. Together, the four-piece project a frenetic live chemistry which they output over the eight track album; a compelling energy they have become well-known for around the Auckland gig scene, where they have packed out venues such as Neck of the Woods and The Wine Cellar.