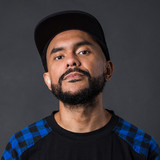 If the first thing you know about Craze is that he's the only solo DJ to win the DMC World Championships 3 times over, prepare to get yourself schooled. By the age of 20, Craze had won his first DMC World Championship. Two more consecutive wins later, he was (and remains to this day) the only three-time winner of the world's most respected international DJ competition, the DMC World Championship - earning the attention of Time Magazine who proclaimed him America's Best DJ. After touring with Kanye West, Craze founded Slow Roast Records with Kill The Noise, an imprint of the infamous Fool's Gold Records (A-Trak, Kid Cudi, Danny Brown). As if that wasn't enough, in 2015 he brought us one of the most prolific DJ routine videos to date: "New Slaves". With greatness at the forefront of all Craze does, in 2016 he started a DJ super group with Four Color Zack - 2¢, with the primary goal of creating and presenting the most exciting DJ show on the planet. Since then they have been taking their brand of witty wordplay and impeccable DJ skills to the masses through their mixtapes and live shows which can be summarized as a true tour de force. Always humble and putting the performance above all else, Craze has earned his place as an international ambassador of the art of real djing.