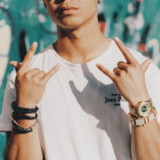 Kevin "Marcus" Aamodt is an avid songwriter, music producer and guitarist, popularly called by his stage names, MagSonics, Hayden K and Kevin M Aamodt. Kevin's passion for music rapidly grew from a young age. He began by playing the guitar, soon followed by drums and eventually the piano. He remains very adept at all these three instruments.

By the of age of 11, Kevin discovered EDM and started MagSonics. Kevin's talent, hard work and dedication to music launched him into the limelight. After only 3 years into his journey, he was discovered by the public radio station (Ålesund & Vestfold) in Norway, and quickly established himself in the entertainment industry in the years that followed. In addition, Kevin has come into the industry with his great charisma, stage presence and talents. He has worked with various top artists, the likes of K-391, IZECOLD, Lewis Capaldi, Creex, Veronica Bravo and upcoming artist's like Ane Flem and R!TA. Michael Jackson, Stevie Ray Vaughan, John Mayer, Avicii, Travis Scott and Post Malone remain as his personal music idols and their art and style have helped shape Kevin's career. Furthermore, Kevin currently manages the Record Label; "Icer Music Entertainment"; he attributes this success to his numerous supporters, mind to work, integrity and professionalism, which is bringing great dividends!