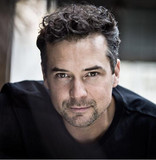 Over the course of decades as a performer, Kaeshammer has developed a style that weaves threads of classical, jazz, blues, boogie-woogie, stride, and even pop into a signature and sought-after sonic tapestry. Born and bred in Germany, Kaeshammer began performing club, theatre, and festival stages throughout Europe in his early teens and continued on that trajectory after emigrating to Canada with his family. Michael's career highlights have been as wide-reaching as the artist's subsequent breadth of style and include: sharing the stage with the likes of Ray Charles and Anne Murray; stints backing singers Marva Wright, the late blues queen of New Orleans; co-writing sessions with rockers Randy Bachman and Colin James, official Olympic Games performances in several world cities; and TV Specials on numerous networks. "I'm definitely looking forward to what's coming up", Michael says, listing off upcoming shows throughout the U.S., Canada, Europe, and China. "It's all been so good, and it's only getting better. I just can't wait to keep making and sharing music with the people that enjoy it." Indeed, his investments thus far have paid off, and will continue to as he carries on along his path, eyes anchored on the horizon and always pushing forward.