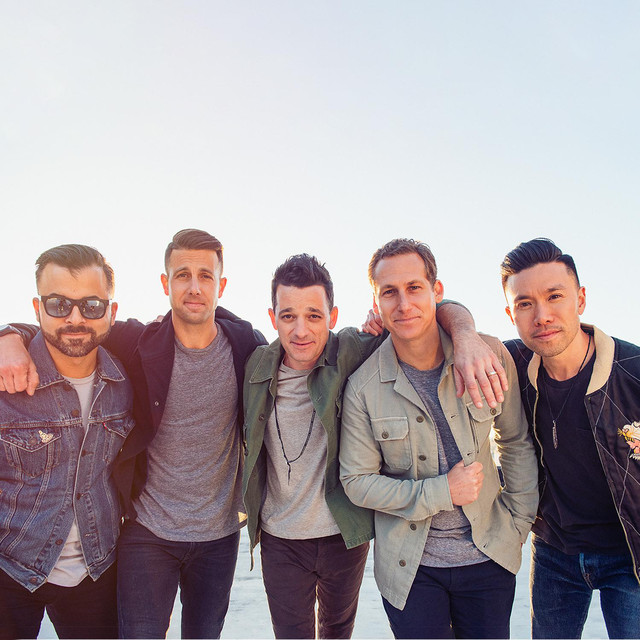 Since emerging out of the Midwestern college circuit in the late '90s, O.A.R. (an acronym for the band's full moniker, Of a Revolution) have transformed themselves from campus jam rock favorites to Billboard chart-toppers with a streamlined alt-rock sound and a massive grassroots audience built through years of hard touring. Staffed by four Maryland natives and one Ohioan, O.A.R. rode their first college radio hit, the reggae- and roots-influenced "That Was a Crazy Game of Poker," to national headlining status with their independently released 2001 album, Risen, making a strong showing on multiple Billboard charts. Over the following decade, they found mainstream success thanks to major-label albums like 2003's In Between Now and Then and 2008's All Sides, while continuing to nurture their live audience through heavy touring and numerous concert releases. Their audience followed them into the next decade, helping 2014's The Rockville LP -- named after their Maryland hometown -- top Billboard's Independent album chart and reach number 13 on the Top 200. Following a two-disc 20th anniversary compilation, XX, in 2016, O.A.R. returned to the studio to produce their ninth album, 2019's The Mighty. Formed in 1996 in Rockville, Maryland, O.A.R. coalesced around lead singer/rhythm guitarist Marc Roberge, lead guitarist Richard On, saxophonist Jerry DePizzo, bassist Benj Gershman, and drummer Chris Culos. Roberge had known Culos since childhood; he also played in local bands with On and Gershman. DePizzo, who hailed from Youngstown, Ohio, met the other Maryland natives at Ohio State, and the band made their studio debut with the release of an independent demo, 1997's The Wanderer. Many of the songs on O.A.R.'s debut disc were written while Roberge and Culos were studying abroad in Israel, and the album was recorded on a shoestring budget in Culos' basement. Two years later, the switch from student band to headlining act began with the arrival of an intensely popular song, "That Was a Crazy Game of Poker," which became a hit on college campuses. The group toured the college circuit as a result, booking shows between classes and encouraging fans to tape each show, which helped spread O.A.R.'s music to a wider audience. The band then went into the recording studio for a second independent demo, 1999's Souls Aflame, which helped them land a distribution deal with Alternative Distribution Alliance. By the time Risen appeared in 2001, O.A.R. had earned enough buzz to hire producer John Alagia for the album, which went on to sell 60,000 copies without a major label. To appease their dedicated fan base, the group issued a popular live album, 2002's Any Time Now, before signing a major-label deal with Lava/Atlantic for the release of 2003's In Between Now and Then. Additional tour dates provided enough material for a second live album, 34th & 8th, and the band began climbing the Billboard charts with 2005's Stories of a Stranger, a studio album that contained a pair of Top 20 Hot AC hits in "Love and Memories" and "Heard the World." A third live offering, the concert set Live from Madison Square Garden, appeared in 2007. O.A.R.'s slickest album yet, All Sides, followed in 2008, and the four-disc live set Rain or Shine appeared one year later. Both were quite popular, with All Sides peaking at number 13 on the Billboard charts. Looking to repeat that feat, O.A.R. swung for the fences again with 2011's King, which found the band reuniting with All Sides' producer, Matt Wallace. Live on Red Rocks, which featured performances culled from their summer tour, arrived in 2012, followed in 2014 by the band's chart-topping eighth studio long-player, The Rockville LP. In 2016, to honor of their 20th anniversary, O.A.R. issued the aptly named XX, a career-spanning collection of their biggest hits and most vital live performances that added new studio material as well. The band returned to the studio throughout 2018 to work on new material, emerging in February 2019 with their ninth album, The Mighty. ~ Robert Hicks, Rovi