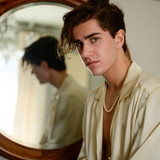 "Lunche punctures the proverbial bullseye so expertly, you question where he's been hiding all this time"..."The emotional drive in this body of work is quite evident"..."Brimming with musical excellence and magnetic devotion"

American Songwriter After being influenced by a solo performance of Eric Clapton's at age five, Simon, at age thirteen became the youngest ever to be endorsed by Gibson, but his true voice on the instrument was found in later teen years while playing his cherished 1956 Stratocaster. ​ Lunche composed a song and subsequent guitar melody that inspired multi-Grammy Award-winning engineer Dave Reitzas ( Stevie Wonder, Barbra Streisand, The Weeknd ) to quickly join his creative company. While mixing with Reitzas, Lunche met Sean Hurley ( John Mayer bassist ) who also became a trusted partner in the production of his upcoming album. Lunche's seductive vocals and emotive guitar playing propel the music forward into a budding world of passion and romance. Rounding it out is Sean Hurley (bass), drums from Aaron Sterling ( Harry Styles, Maren Morris, John Mayer ),