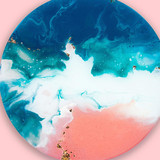 Strawberry Blonde originally formed in the basement of the SUNY Purchase Conservatory of Music in 2015. The band drew comparison to groups such as Foxing, The 1975, American Football, and Bon Iver due to their eclectic mix of pulsating R’n’B-informed rhythms, dreamy guitars, intricate horn arrangements, and powerfully introspective pop vocals. Their debut EP “Better Still” saw release in 2016, and the song “Another Dream” appeared in the film “All Those Friendly People” alongside the likes of Basement, Joyce Manor, and Funeral Suits. Another track "Biding Time" would also be included in the LGBTQ+ short film, "Never Have I Ever." Their sophomore EP "Calling" released in January 2019,